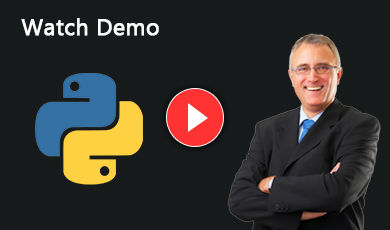 Learn Python from BigClasses. Master the professional way of developing an advanced application with industrial standards. Create and build your own application by exploring Python. This Training will help you be an expert in Python Structures, Dynamic Typing, Various Operators–Assignment, Arithmetic, Relational, Logical, and Bitwise Operators, types of functions, OS Modules, CSV, and PDB.

It is a robust, and a high-level programming language. It is built in dynamic semantics, data structures, and advanced typing.It is used in different fields such as web technologies, cloud computing, data mining, etc. You can apply this Python to any dynamic projects and write the program. It will help the programmers build and develop their application rapidly. It has a feature called syntax emphasize readability which will reduce the cost maintenance of the program. Python will help users to re-use the code. Also, its standard libraries are available without charge and can be used for major platforms.

Python is growing extensively due to its increase in productivity. It supports the Object Oriented Programming to develop advanced applications and provides high-level of data structures. Python easy to learn and very powerful scripting language and due to this, it develops strong applications. It is an ideal language for scripting due to its Python’s syntax and dynamic typing. Python known as multipurpose as it can be used to the web, enterprise, 3D CAD, etc. It makes debugging and development faster due to the absence of a compilation steps in the Python Development.

Python is easy to learn and use and is a developer-friendly with the high and advanced level of programming language. It is more expressive than other programming languages. It is an uninterrupted language where the interpreter can execute the code line just by lining it at the time. This makes the debugging faster. It can be used on different platforms as Windows, Linus, Unix, and even Macintosh. You can learn this programming language easily as it an freely available at its website. It is an open source program. Python can imply other languages such as C and C++. These languages can be compiled and used in Python Code. Also, it has a large and broad library which provides an excellent set of modules and functions for developing the application rapidly. It supports Graphical User Interface (GUI) and it can be created using Python.

Why Learn This Course ?

The Python training online by Big Classes will help you master the following:

The Python training can be learned by anyone looking forward to building a career in as a Python Programmer. This can be learned from the following professionals.

A person trying to learn this course must have a basic knowledge of Object-Oriented Programming System (OOPS), basic programming languages

Getting started with Python