The Growth and Development of Digital Marketing in Future

In a world that is teeming with people using social media on a regular basis and the numbers only swelling by the minute, it has become a norm rather than an exception that every person be conversant with at least the core tenets of Digital Marketing.
Simply put Digital Marketing is the promoting of products on the Internet or any online platform. According to the Digital Marketing Institute, Digital Marketing is the use of digital channels to promote or market or services to targeted businesses and consumers.
The world is increasingly using digital content on a daily basis. It goes without saying that very soon traditional marketing will disappear which will consumed and taken over by digital marketing as digital marketing is more affordable than traditional marketing. We get to reach out to a larger audience base in a much shorter period. Advancements in technology have only paved the way for a large decrease in the customer base of the clichéd traditional marketing agencies as people now have progressed on to tablets, phones and computers the select avenues that have given a vast scope for digital marketers to proliferate. 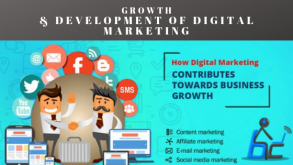 The word Digital Marketing was first used in 1990. The Digital Age began with the advent of the Internet and the development of the web 1.0 platform. The web 1.0 platform gave leeway to customers to find the information they wanted but did not permit them to share the information on the web. Marketers were not sure of the strategies that would work as the Internet had not yet witnessed a widespread deployment.
In 1993 the first clickable banner went live post which HotWired bought a few banner ads for advertising. With this began the metamorphosis to the digital area of marketing and because of this, gradual shift the year 1994 witnessed new technologies enter the digital scene.
With the epithet of ‘Jerry Guide to the WORLD Wide Web after its founder Jerry Yang, Yahoo received close to a million hits in the first year itself. This prompted companies to optimize their websites to pull in their search engine rankings. The year 1996 saw a couple of more search engines and tools like Hotbox, Look Smart and Alexa.

1998 saw the birth of Google. Microsoft introduced the MSN search engine and Yahoo got the Yahoo web search to the table. Two years later the Internet bubble burst which left all the smaller search engines behind in the process making room for the giants. Digital Marketing saw the first surge in 2006 when the search engine was to have grown to about 6.4 billion in only a single month. Later came the Web 2.0 that permitted users to interact with other users in the business. Tag lines like ‘super information highway began to be attributed to the Internet. By 2004, Internet marketing and advertising in the US alone fetched 42.9 billion.
Soon after social marketing began, MySpace was the first to stake claim which was followed by Facebook. These avenues opened routes for business and welcomed the arrival of a new chapter for increased business which companies could capitalize on and promote their brands on social networking sites.
The cookie was yet another milestone in the digital marketing school. One of the methods adopted by marketers was to track common browsing habits and the usage patterns of habitual users of the Internet so as to customize promotions and marketing collaterals to the customer’s tastes. The usage of the cookies has far advanced over the years as cookies today are coded to offer the marketers a plethora of ways to collect the lateral use of data per se.
Statistics collected by Marketingtechblog for 2014 show that posting on social media is the most prominent activity in the US. The average American spends close to 37 minutes on social media every day. 93% of marketers use Facebook to market their businesses, 97% use Twitter, 69% use Pinterest, 59% use Instagram, 70% of B2C marketers have acquired customers via Facebook. The top three social networking sites used by consumers would be LinkedIn, Twitter and Facebook.
The digital marketing arena is in a constant state of flux. Digital Marketing people must be flexible enough to survive this flux and keep themselves afloat with the emerging trends so that they do not remain behind in the race.

Previous: What is SERP?
Next: Search Engine Optimization ( SEO )